“The world is overrun with monsters called Nemesis, and a young boy infected by them will stop at nothing to defeat them all!” – Radiant. Purchasing this manga was probably one of the best things I have ever did in a long time. Radiant by Tony Valente has recently been published by Viz Media. Currently Radiant has one volume out in english, with a total of 184 magical pages to read.  Radiant just may be the next big shōnen manga to arrive. Definitely with it anime airing this fall in October. I think we have a lot to look forward to. In this breakdown I will talk about the following, the plot, the characters, the art, and give my overall thoughts. Please be warned this breakdown may contain spoilers. I suggest reading the manga on Mangakakalot first before proceeding.

Summary: “Seth is an apprentice sorcerer from the Pompo Hills. Like all sorcerers, he’s an “infected”, one of the few people having survived an encounter with a Nemesis, those creatures falling from the sky and destroying everything around them. Being immune to them, Seth wants to become a Hunter and fight the Nemesis. But what Seth really wants is to find the source of all Nemesis, the Radiant. Helped by his fellow sorcerers, he will seek the Radiant, under the harsh scrutiny of the Inquisition…” -Mangakakalot

The world is in trouble, monsters known as Nemesis are falling from the sky. These Nemesis are not here to make friends either. They are here to cause destruction, and chaos to anything, and anyone in their way.  The question is, can anyone stop these monsters from wrecking havoc! Why yes there is! The “infected” also known as wizards are the only ones capable of fighting these horrible monsters. However, this task prove to not be easy when those who are infected are feared as if they are the Nemesis. Seth our main character does not let this stop him! Determined to fight the Nemesis, and become the greatest sorcerer alive… he will do whatever it takes to reach his goal.

Where do I even start! I truly enjoyed reading the first volume of Radiant. It  was way better than I expected it to be. Volume one does a lot of explaining to help you get a better understanding of the story being told. For example, you learn in volume one that not everyone can fight the Nemesis unless they have been “infected.” Normal people die at the touch of a Nemesis. We also learn that magic user can’t do magic with their bare hands. For this is extremely dangerous, and could cause your body serious harm. In order to manipulate fantasia which is magic … the magic user must use some kind of weapon, or tool. For instance, a magic user could use some of the following items, parchment cards, gloves, broom, blades, wand, seals, and even potions. I loved learning all these little tid bits in the story, because for me it made it easier to actually visualize what was going on. I think Tony Valente did an excellent job with explaining the important information in a fun way that didn’t make it boring. Though the plot seems a bit cliché it is also unique in its own way. What do I mean by that?  The magic! The way Tony Valente approaches how magic can only be used in a certain way is intriguing to me. What makes it more intriguing is not any Joe schmo can use magic. You must be an “infected,” meaning you survived the touch of a Nemesis. I am really excited to see what volume two has to bring now that he has done the explaining, and setting up the story. I think Tony Valente is about to takes us on a magical adventure to fuck up some monsters.

Seth’s hair is tousled, with little horns, a sign of his infection. He wears a black and white short-sleeved vest, an orange tank top, blue Bermuda shorts, and black boots. He wears bandages on both hands, and a bandage on his right cheek.

Seth is rather careless, and sometimes impulsive. However, he is full of good will. Seth never hesitates when it comes down to helping others, or repairing damage he caused. Seth may seem silly, both in his action and words, but he knows how to be down to earth, and reflective. On the hand Seth can be rather brutal, but not by malice.

Rather by his carelessness, which often gets him in big trouble. Being that Seth is an infected, Seth is sometimes a target when comes to violence, and hatred of others. This has often made him want to destroy everything, and make those who are violent pay! However,  despite all the resentment, bitterness, and anger he has towards those who are violent. Seth refuses to be the monster they think they have seen.

Alma who is considered to be Seth Foster mother since she raised him is also his mentor. There is very little information about Alma … except that she is a very powerful witch. So powerful that it is enough to scare Yaga, a member of the Treize Coven.

Alma hair is a huge disheveled mop that is tied up with headbands. She has a few piercings, and is dressed in a purple vest, an orange blouse, black harem pants, and jester shoes. Alma wears several belts, to which are attached various of different potions, and other magical weapons. Furthermore, Alma does not have her right arm.

Alma is a woman of strong character, most think she is scary and intimidating. She does tend to gets angry quickly and often uses violence. Nevertheless, she is full of common sense, she knows how to show diplomacy and wisdom. Even kindness! Alma has never wounded civilians, even when they attacked Seth as a child.

Melie is a pretty young woman with big red curly hair, as well as blue eyes. She is wearing a blue headband, and dressed in a blue ensemble with a blue skirt that has white stripes. Her top is also composed of an orange scarf tied around her bust. Melie has tattoos on her right shoulder, right forearm, right thigh, and right calf. Each tattoo has a different meaning.

Melie is usually a very kind, and super generous kind of gal. She absolutely loves the atmosphere of parties, and ceremonies. However, Melie wishes above all to simply make friends with others. Due to her infection, which is reversal of emotions … she quickly becomes a fury beyond control .

This often scares people away, and causes them not want to be around Melie. Which leads to Melie often feeling lonely.  However, this does not stop Melie from trying to make friends. We see in the first chapter that she is very insistent with becoming friends with Seth.

Doc is a middle-aged man. he has tousled brown hair, big eyes, and a small mustache that is separated into two. Doc wears a striped shirts, black sling pants, and his oh so famous double tie!

Doc has a rather reserved personality , a bit introverted, and very timid. Doc is the kind of guy who prefers to have a rather stable, and safe life style. rather than throwing himself into the unknown of adventures, and epic battles. You will notice that doc lacks a bit of confidence in himself, and often prefers to run away from the problem than to face it. Doc even does this with people likes.

The characters in Radiant are so far seemly interesting. Seth the main character is a bit of a cliché character. I mean come on we all have heard of the hero who wants to be the greatest at something while the kick bad guy butt. Nonetheless Seth is still an interesting guy to follow. I am hoping we get to see more of Alma … she seems like she a real bad ass who doesn’t take no shit from anyone. I think Melie infection intrigues me a whole lot. I defiantly want to see more of her when her infection acts up! Doc seems like he in the story for comedy purpose … which isn’t a bad thing at all.

The art has a refreshing clean style about it. How do I explain it … it isn’t extraordinary like we haven’t seen this style done before.  Even so, there is something about the way Tony Valente draws theses intricate amazing  backgrounds, and still make the main characters stand out.  It is absolutely crazy that he is capable of  doing that. I mean that can’t be an easy task!  Then again I am not very artistic so I could be wrong. nonetheless, I really enjoy that aspect of his art. 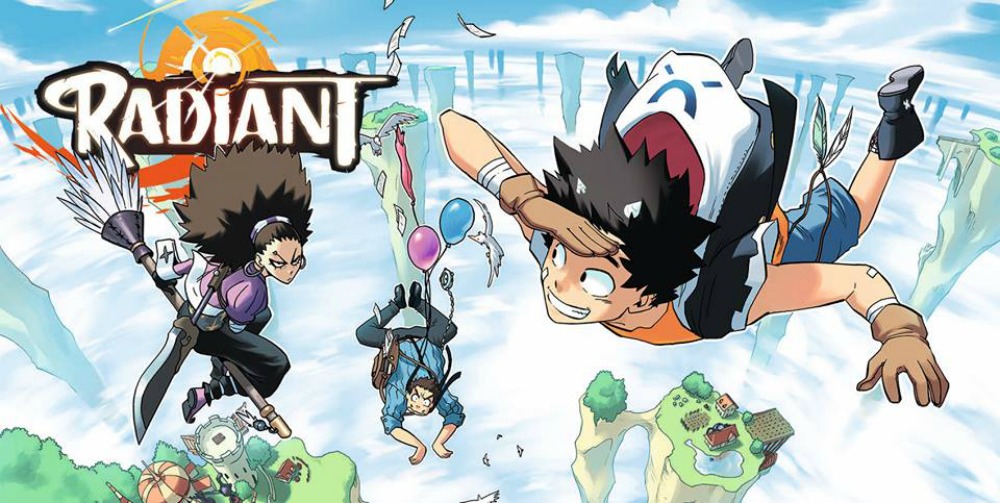 Radiant volume one was an enjoyable read from start to finish. I know I already said this, but I am seriously happy that I just so happened to stumble upon this manga at the book store. I defintely think this is going to be a series that I am going to highly enjoy from start to finish. The plot seems interesting, the characters are really cool, and the art is pretty darn awesome. What a perfect combination if you ask me! I know for one thing I will for sure be watching the anime.