I have been meaning to talk about Magical Girl Spec Ops Asuka for a while now. Currently with four English  manga volumes out ( Just purchased the fourth volume on amazon) Magical Girl Spec Ops Asuka is a brilliantly written manga by Makoto Fukami, and illustrated by Seigo Tokiya. Guys 2019 needs to hurry its ass up, because this manga is getting an anime adaptation that I am thoroughly excited about. I have a huge weakness for magical girl anything! Some people like idols, but I love magical girls.

Summary: When the Earth is threatened by the sudden appearance of undead creatures, a group of young women blessed with powers from a mysterious source rose to defeat them. Now, after three years of apparent peace, the same malevolent creatures have resurfaced. Five magical girls are once again conscripted to war as the Magical Girl Special-Ops force, to defend mankind from an unholy nemesis. ( Source ANN)

My Thoughts: First off the trailer sent chills down my spine!!!! I am just saying the animation looks like it is going to be freaking awesome! Let us not forget that Fukami is the same person who wrote Psycho Pass. If you haven’t seen, or read Psycho Pass you are missing out on a phenomenal series. This man is a pure genius when it comes to writing. Eriko Matsui as Mia Cyrus, or Magical Girl Just Cause Mia. Three years ago she victoriously survived the Distonia War as one of the “Magical Five.” She is skilled in gunfights. She is a member of JSOC’s United States Naval Special Warfare Development Group, also known as SEAL Team Six. She has a confident personality and demonstrates no hesitation. (Source ANN) Ayana Taketatsu as Chisato Yonamine, an Okinawan girl with dark, hollow eyes. She lost her mother and her right leg in a traffic accident. She was a karate student, but must now live her life from a wheelchair with that denied from her. Everyday her father degrades himself and abuses her. (Source Ann) Aya Suzaki as Asuka Ōtorii, or Magical Girl Rapture Asuka. Three years ago she victoriously survived the Distonia War as one of the “Magical Five.” She exhibited unparalleled strength during battle. She carries wounds in her heart from the war, and tries to distance herself from fighting. (Source ANN) Akira Sekine as Kurumi Mugen, or Magical Girl War Nurse Kurumi. Three years ago she victoriously survived the Distonia War as one of the “Magical Five.” She is a good friend of Asuka’s, and adores her. She handles medical treatment, interrogations, and tortures. (Source ANN)

My Thoughts: The manga is really fucking bad ass. The plot is enticing, intense, and edgy! The characters are all well thought out with pretty awesome back stories. The illustration really matches well with the story being told before you. Seeing that this is getting an anime adaptation January 2019 is honestly no surprise. Definitely with the writer being Fukami, he has written so many good series that many people recognize as outstanding. I am really impressed so far with the character designs seen above … this only pumps me up even more for the anime. Yoko Suzuki did a swell job with drawing me in with their style. If I didn’t know shit about the characters, because of the manga I would want to know more because of the designs. They look very well detailed, and have great facial expressions. Big plus they are all hot! 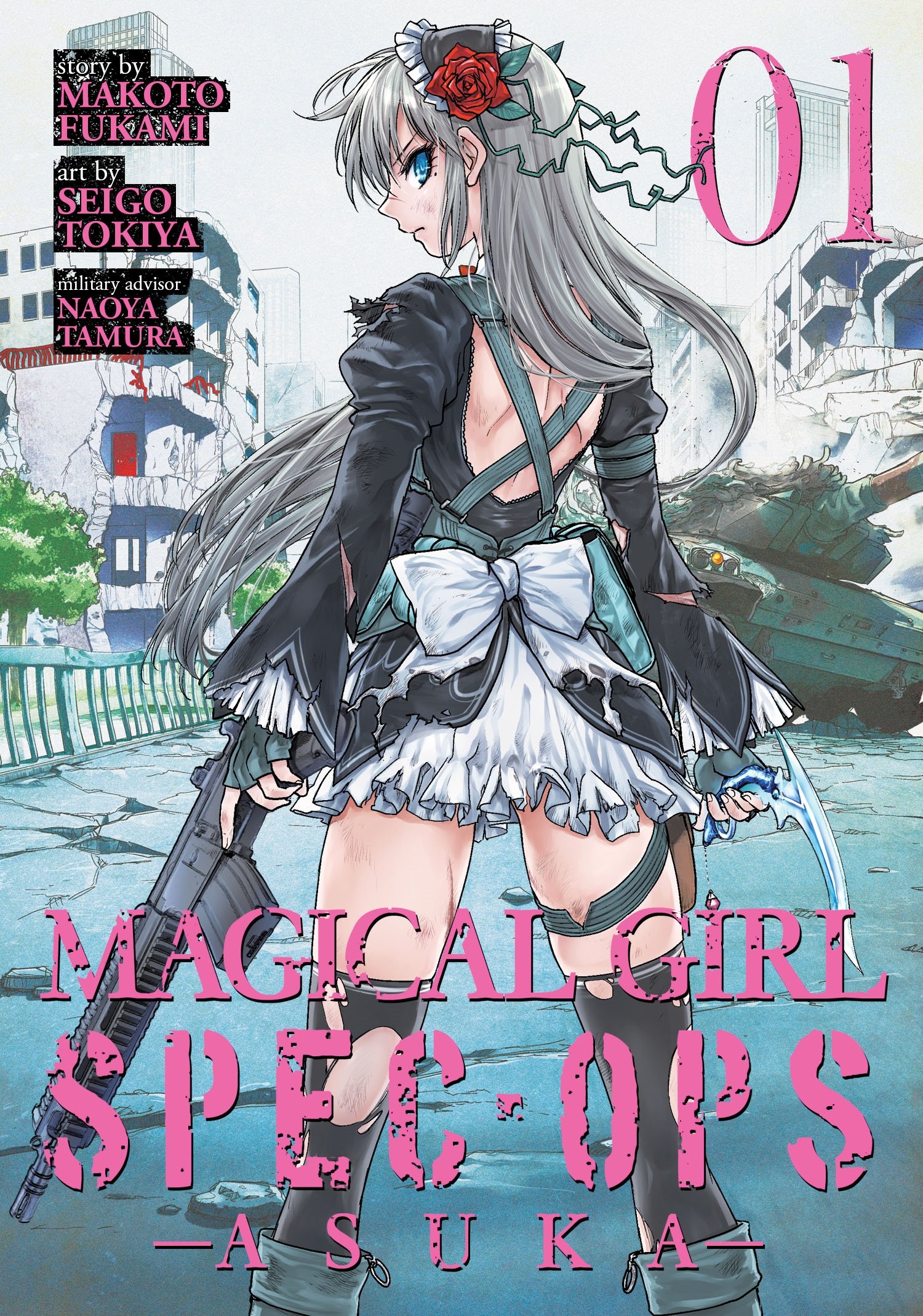 Summary: Three years ago, alien invaders ravaged the Earth–until they were defeated by a group of young women blessed with powers from a mysterious source. The girls went back to their normal lives after vanquishing the ghastly monsters, but that time of peace is about to end. The same malevolent creatures have resurfaced, which means it’s time for the Magical Girl Special Ops force to head back to the battlefront and defend mankind! (Source Amazon) 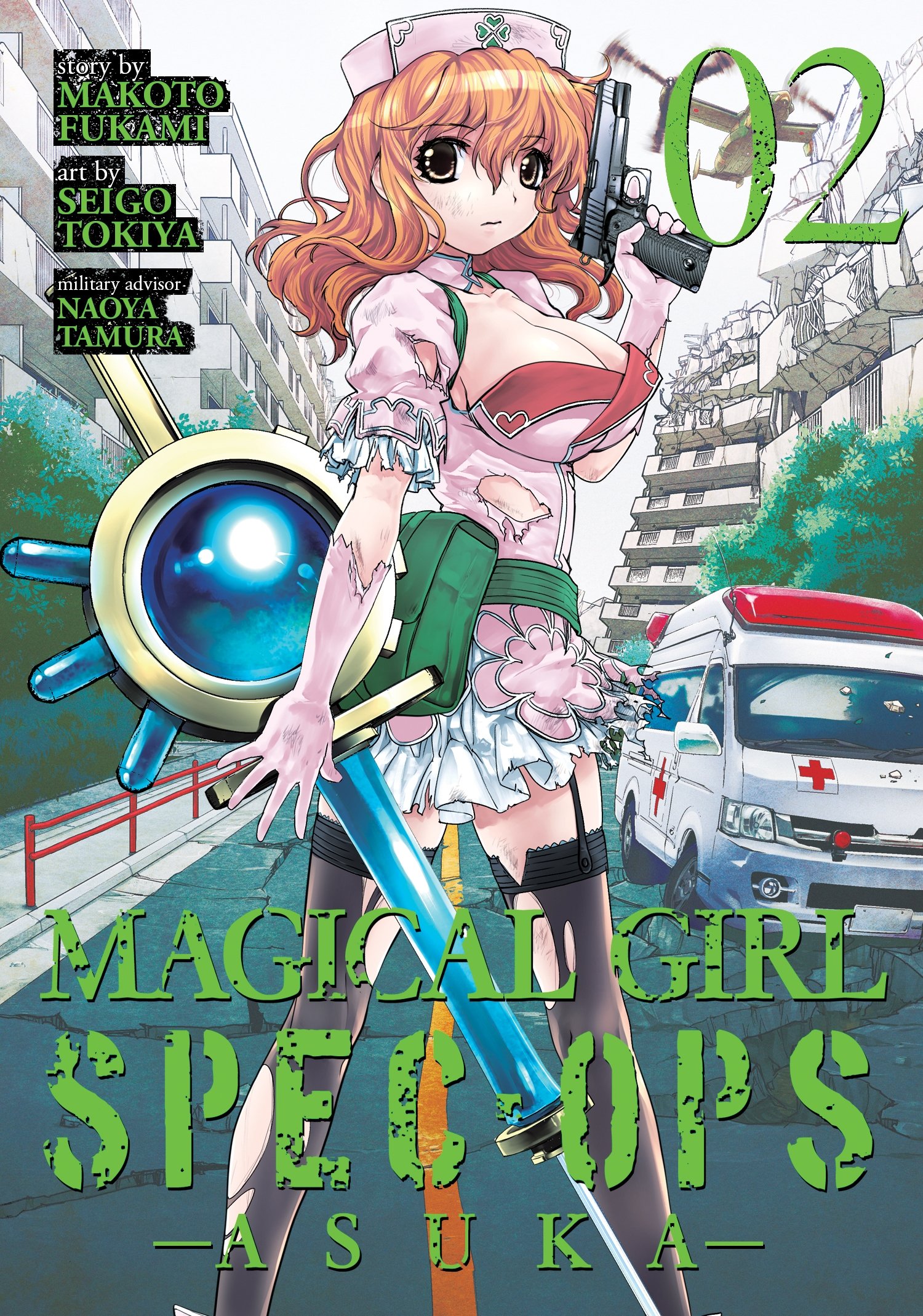 FROM RUSSIA WITH LOVE

Asuka wants to leave behind her past as one of the Magical Girls who saved the world, and live a normal high school life. Unfortunately, things are never easy for a retired hero. When a pair of sorceress Russian mercenaries kidnap one of her classmates, Asuka is forced back into the fight. There’s more to this kidnapping than meets the eye–and it might just take some Magical Girl Spec-Ops to set things right (Source Amazon) 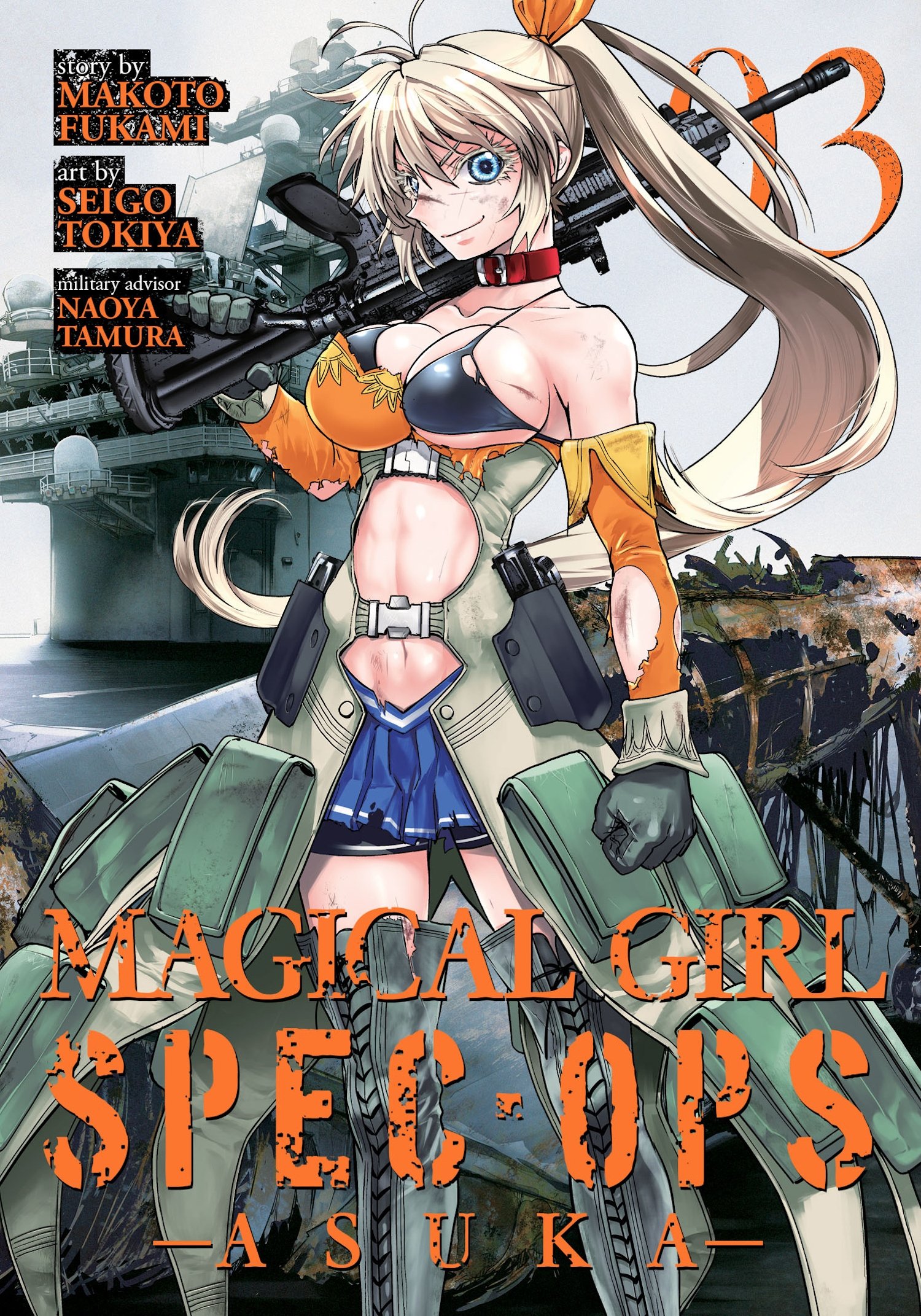 After her friend’s kidnapping, Asuka knows one thing for sure: She can’t hide from the dangers of the world’s magical underground. Japan’s newest special operations unit is more than happy to bring her on board, and their first test isn’t long in coming. In an age of magic and spirits, Earth’s arms dealers jump at any opportunity to seize some arcane relics of their own–even if the asking price is human lives. It’s time to send in the right magical girl for the job. (Source Amazon) 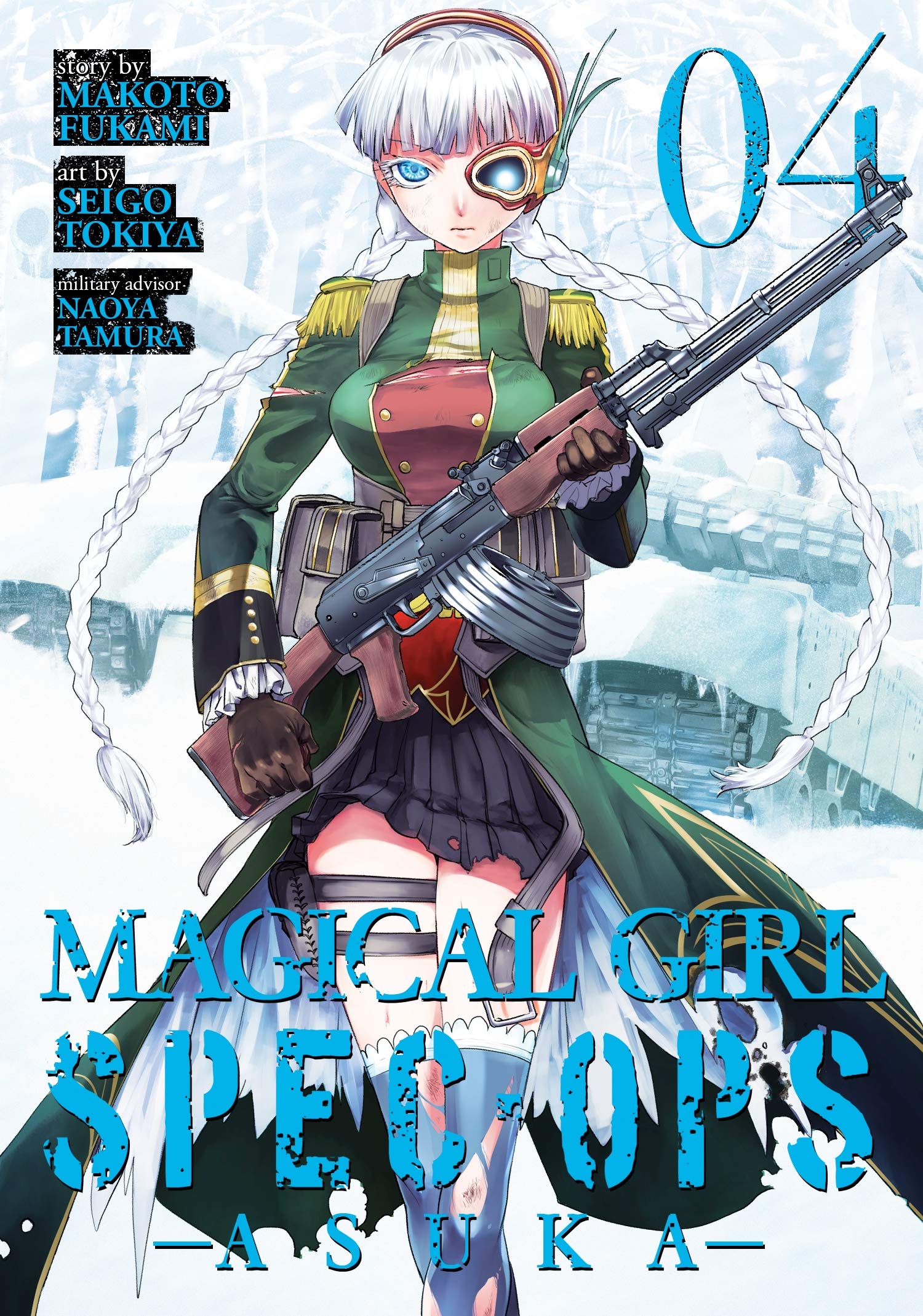 A top-secret summit between the nations of Earth and their otherworldly counterparts draws near–and it’s Asuka and her fellow magical girls that will need to keep it safe. A shadowy organization moves behind the scenes, plotting slaughter and catastrophe. The sinister Giess has trained a murderous magical girl of his own, and with a small army of monsters on his side, it’ll take everything Asuka and the special forces have to hold him off. The time has come for Asuka and her old comrades to join forces once again in deadly combat! (Source Amazon)

You can find these volumes on amazon for pretty darn cheap however, some of the manga chapters are available online for free! If you would like to read it for free to get a feel for it please click HERE to begin your magical journey! I will admit the dark theme magical girl has been done before, but I don’t even care because I personally think this series is done that well.

Overall I think we are in for a big treat, or well I think I am in for a big treat anyways lol. I would love to hear your thoughts on Magical Girl Spec Ops Asuka anime trailer .. what did you think about it? Is this an anime you might watch? Are you currently an avid reader of the manga? I would love to know in the comment section below. I am currently working on a breakdown (review) on volume 1, so keep your eyes peeled my friends. Thanks for reading!