Manga is a lot of fun to read for it opens up your imagination to endless possibilities. However, rather it be a book, or a manga we all have that one, or two authors that really stick with us! In this awesome blog post I am going to talk about three of my top manga authors. The following three authors that will be mentioned are Makoto Fukami, Moto Momono, and Haru Akiyama!

Makoto Fukami has written some of my favorite manga series in the world lol. Yes I am being a bit dramatic, because he does an awesome job when it comes to telling a story. honestly though he does an amazing job at portraying action scenes, and lesbian love. Some of my favorite manga’s by Makoto is Psycho Pass, Boku no Gakkou no Ansatsu-bu, and Young Gun Carnaval. I am currently reading Magical Girl Spec-Ops Asuka by Makoto … I can’t wait for volume 4 to be out in English.

Summary: Justice, and the enforcement of it, has changed. In the 22nd century, Japan enforces the Sibyl System, an objective means of determining the threat level of each citizen by examining their mental state for signs of criminal intent, known as their Psycho-Pass. Inspectors uphold the law by subjugating, often with lethal force, anyone harboring the slightest ill-will; alongside them are Enforcers, jaded Inspectors that have become latent criminals, granted relative freedom in exchange for carrying out the Inspectors’ dirty work.

Into this world steps Akane Tsunemori, a young woman with an honest desire to uphold justice. However, as she works alongside veteran Enforcer Shinya Kougami, she soon learns that the Sibyl System’s judgments are not as perfect as her fellow Inspectors assume. With everything she has known turned on its head, Akane wrestles with the question of what justice truly is, and whether it can be upheld through the use of a system that may already be corrupt. ( Source MAL)

Boku no Gakkou no Ansatsu-bu

Summary: Having 157cm in height, for Fukasaku Reiji the fact of being 1cm shorter from an average girl in his age was a serious matter. Yet another problem arise when he witnesses the beatiful girl -Mitajima Yukari who attends the same school as him murdering a person. He later learns she is a part of [assasination department] which specializes in obliterating particular people in society. Reiji after falling in love with her decides to join up the organization. The story of puberty, love and conflict of a boy who step into the world of guns begins. (Source MAL)

Summary: High school student Jinpachi Kogure is a member of the manga club and is no good with women. Yumika Testuyoshi is a troubled female high school student who’s always skipping school and searching for a girl she doesn’t hate. However, these two are in reality young masters of the art of killing people: “Young Guns”—-!(Source: AnimeSigma)

Moto Momono writes, and illustrates beautifully. I absolutely adore all of her yuri work. You will notice this author works are filled with drama and angst, but she does have some fluff! I have mention this before, but I am yuri trash, and I have no regrets about it either lol. I love yuri that is easy to relate to in real life, and Moto Momono work is just that … easy to relate to.  My all time favorite yuri read by Moto Momono  is Kimi Koi Limit! Summary: Back in high school Sono confessed her love to Sato, but she was turned down. Now she lives as a freeloader in an apartment shared with her girlfriend, Hiroko. However, she still hasn’t forget about Sato and when she cries out her name while having sex with Hiroko, she finds herself in some serious trouble…(Source: MU)

The All Mighty Haru Akiyama 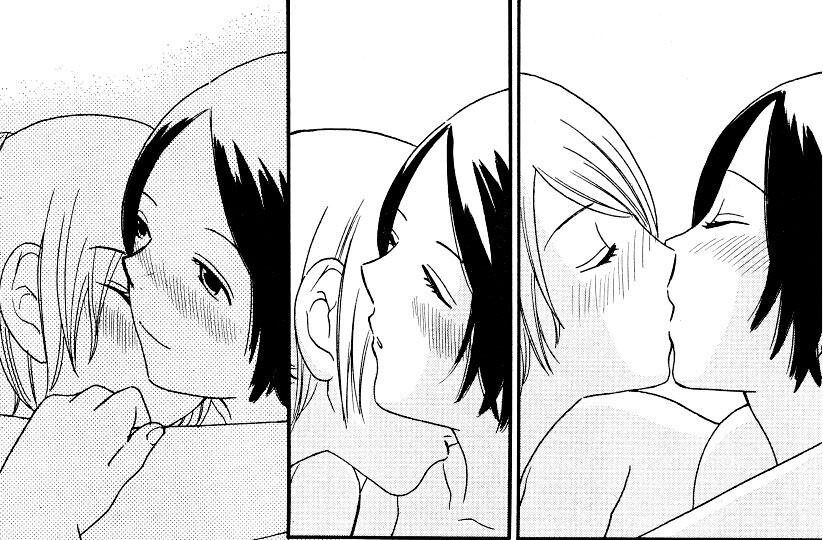 Haru Akiyama wrote the second yuri manga I ever read (Girlfriends was first). Haru story has a realistic lesbian vibe that I really dig in her manga Octave. Though her illustration were off putting at first they really grew on me as 16 or 17 year old me read her manga on Dynasty scans. My all time favorite from this author is Octave. Summary: This story revolves around 18-year-old Miyashita Yukino and her life as a former idol. As a child, Yukino had always been fascinated with TV. And before she knew it, she wanted to be one of those idols behind the screen. At 15, she entered the entertainment industry and debuted as a member of the four-person group “She’sN.” However the group wasn’t very successful and they broke up shortly afterwards. Returning home in disgrace, Yukino was welcomed with people’s curious looks and hurtful words.

Wanting to find herself, regain her pride, and perhaps experience love, Yukino decides to move back to Tokyo. There she meets a certain woman, former composer Iwai Setsuko. Together they embark on a very interesting and mysterious relationship. ( Source MAL)

Makoto Fukami, Moto Momono, and Haru Akiyama are all three amazing authors that I would recommend anyone to their manga’s depending on what they are into. These three authors have stuck with me through the years. I am constantly checking if they have new manga out, or not.  If you are enjoying this 30 day challenge I have created, please be sure to check out my blog post called, Luna Senpai 30 Day Anime and Manga Challenge!?!?! NANI!?! to join the challenge yourself! Thank you very much for taking the time to read my boring post. I truly do appreciated! Be sure to comment below your favorite manga author.