As a kid I always had a fascination with comics. It wasn’t until I was a about 12 years old when I discovered manga … I remember thinking to myself how interesting, and different. Manga immediately capture my eyes due to how different it was from the standard American comic book. 12 year old me thought wow how cool you read this book starting from the back. I remember what grab my attention the most about manga was how visual they are compared to comics, and not as many words. Someone with ADHD this is a plus … since my focus is like a fly. I felt like a whole new world had open up to me that day in the book store.

Enough of me rambling … what three manga’s have I chosen for the 30 day challenge you may be wondering? Huehue well I am glad you ask! The following three manga’s I chose are, My Hero Academia: Vigilantes, Magical Girl Spec-Ops Asuka , and RWBY: Official Manga Anthology. In this blog post I will discuss why these three manga’s are my favorite, and give you a mini breakdown of each manga.

Hey guys, just want to give my current readers, and new readers a heads up. From this point on this blog post will contain spoilers. If you are not a fan of spoilers I suggest checking out the manga’s first … I did link them if you would like to purchase them. As always I will be sure to source anything that didn’t come from my mouth for plagiarism is whack like crack.

Summary: In the world of My Hero Academia, not everyone needs a license to fight for justice! In a super-powered society, there is nothing ordinary about evil anymore. Heroes, trained and licensed to protect and defend the public against super-villains, stand above all the rest. Not everyone can be a hero, however, and there are those who would use their powers to serve the people without legal sanction. But do they fight for justice in the shadows, or for reasons known only to themselves? Whatever they fight for, they are called…vigilantes.

Koichi Haimawari couldn’t make the cut to become an official hero, so he uses his modest Quirk to do good deeds in his spare time. Then one day a fateful encounter with some local thugs leads him to team up with two other unlikely heroes. None of them really know what they’re doing, but they’ve got the courage—or foolishness—to try. But they soon discover fighting evil takes more than just being brave… ( Source Amazon)

“For those who possess the soul of a hero, they need not think of anything else!” – Knuckle Duster

My thoughts: My Hero Academia: Vigilantes currently has one volume out, the second volume will be available October 2nd, 2018. Published by VIZ Media LLC  on July 3, 2018, with a whopping 208 fun filled pages you are in for a great adventure. I really enjoyed reading the first volume of Vigilantes. It was amusing, new, and a different outlook on heroes in the MHA world. I really like the thought of heroes being heroes without being register. They are going against the norm, and just being decent humans in society. the story lacks when it comes to getting to know the characters, but it is just the first volume.

Koichi your typical nice guy seems to live a pretty average life. Going to work, school, and on the side he helps people out undercover with his quirk “slide and glide”. With his quirk he is able to slide at the pace of a bike, but he as to make three points of contact for his quirk to work properly. People know undercover Koichi as Mr. Nice Guy. Things seem to be going pretty well for Koichi until he makes a run in with three thugs. For instance, Koichi runs into the thugs on the streets as just himself. He was able to stop the thugs, but runs off because he isn’t much of a fighter. The second time they encounter Koichi is at his job were they beat him up. The third time is in an alley were he is Mr. Nice Guy. Things start to get really out of hand when suddenly a mysterious man falls from the sky, and rescue Koichi, and the idol involved. The story than goes on about a mysterious drug that has been going around. Basically people take this drug, and it enhances their quirks. However, this drug turns people into villains… 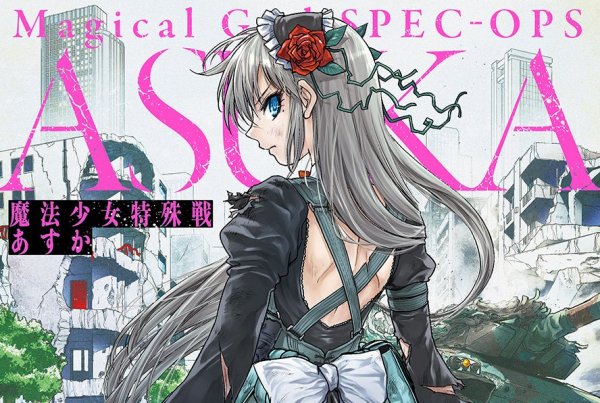 Summary: MAGICAL GIRLS WITH BIG GUNS! Three years ago, alien invaders ravaged the Earth–until they were defeated by a group of young women blessed with powers from a mysterious source. The girls went back to their normal lives after vanquishing the ghastly monsters, but that time of peace is about to end. The same malevolent creatures have resurfaced, which means it’s time for the Magical Girl Special Ops force to head back to the battlefront and defend mankind! (Source Amazon)

The story follows our main girl Asuka, a magical girl who saved the world from the apocalypse that happen three years ago. For the most part life has gone back to normal for Asuka. However, her mental state not so much. Asuka is still distress, and detached from losing her friends, her family, and so much more that she had before becoming a magical girl. Hoping to stray away from being a magical girl Asuka tries her hardest to live a normal life. Unfortunately her normal life doesn’t last long… issues quickly arise. When it comes down to saving friends Asuka doesn’t hesitate.

The world of Remnant is filled with horrific monsters bent on the destruction of humanity. Fortunately, the kingdoms of the world have risen to combat these forces by training powerful Huntsmen and Huntresses at academies around the planet. Ruby Rose, Weiss Schnee, Blake Belladonna and Yang Xiao Long are four such Huntresses in training.

Ruby may be team leader, but she’s got insecurities just like the rest of us. In fact, her worries run deep. These stories show how Ruby overcomes her shortcomings to be a true hero—and what drives her to do it! From a team of exciting new manga artists comes the first volume in a series of short story collections showcasing Ruby, Weiss, Blake and Yang! ( Source Amazon) 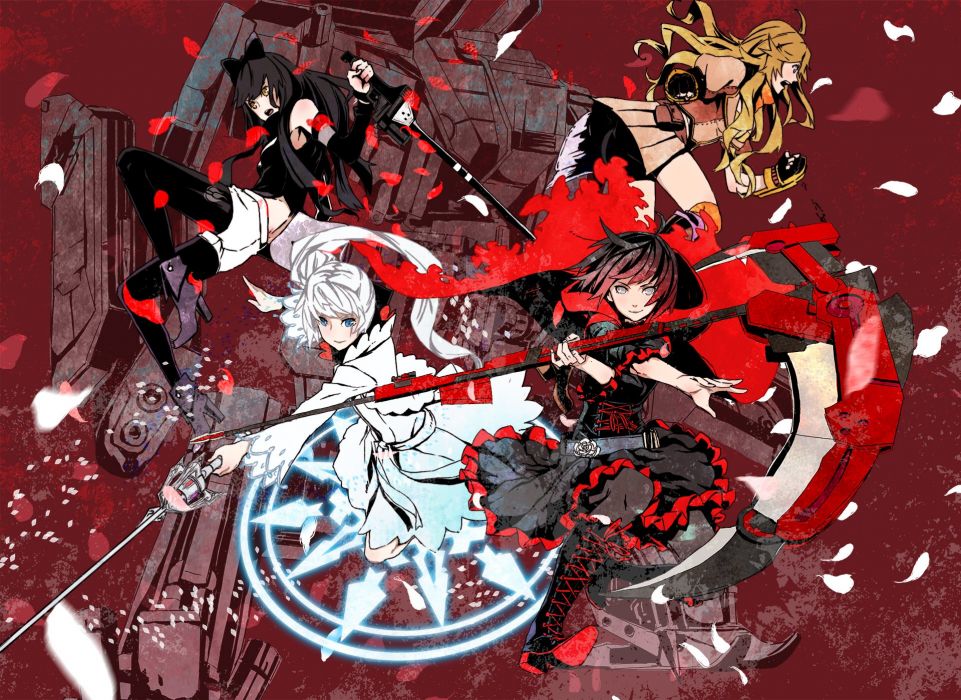 “I don’t need people to help me grow up! I drink milk!” -Ruby

My thoughts: RWBY manga series currently has two published books by VIZ Media LLC on May 15, 2018. The third manga is expected to be published November 20, 2018. In the first volume there are 184 wonderful pages to read. I would like to clarify that this isn’t a manga made by Shirow Miwa it is anthology. I am a huge fan of the animated series, so when I found out RWBY had a manga series … I was all in. The manga series is very lighthearted, and cute. The four volumes will focus on each of the girls in team RWBY … given us fans mini stories that will take place throughout the entire animated series.

The first volume focuses on Ruby … we get to see a various of mini stories of Ruby going on adventures, baking cookies, and having plenty of cute moments with her teammates.  Seriously no two stories in the first volume about Ruby are alike. You definitely get a variety, which is awesome. For instance, you have stories about when the team first formed, and a precious moment between Ruby, and Weiss that you don’t see in the animated series. RWBY first volume is pretty easy to follow without getting confuse … even if you haven’t watched the animated series. You will find that the manga series offers a lot of comic relief, which was a major bonus for me.

Manga truly opened up a new world to me … it was like experiencing my first Christmas that I can actually remember. I truly hold manga dear to me, because of how fun, and expressive it is. If you would like to participate in my 30 day anime, and manga challenge, check out my post “Luna Senpai 30 Day Anime and Manga Challenge!?!?! NANI!?!” to start your epic journey. Remember guys it is okay if you slip up during the challenge … just try and post the next day. Everyone gets busy so it is understandable. Welp, thank you for taking the time to read my post … as always I appreciated.